Smartphones are useful for a lot of things. You can read the news, watch videos, play games, keep up on your email, and even write a novel on a smartphone. Oh yeah, you can also make phone calls and send text messages.

But sometimes you want a larger screen, a bigger keyboard, or some of the other features you get from a laptop or desktop computer.

Today most of us probably have at least two devices: a smartphone and a PC (or Mac… which is technically a PC, but whatever). Andromium CEO Andrew Jiang envisions a world where you only need one: your phone. Want more screen space? Just plug in a peripheral… like the company’s Superbook.

On the latest episode of the LPX Show, I speak with Andromium CEO Andrew Jiang about the idea behind the Superbook, why he thinks the idea has resonated, and how it differs from previous laptop docks, such as the ill-fated Palm Foleo and Motorola Atrix Lapdock.

The Superbook looks like a laptop. It has an 11.6 inch display, a full-sized keyboard, a battery, and USB ports. But it doesn’t have a processor, memory, storage, or an operating system.

Instead, you can plug an Android phone into the Superbook and your apps will show up on the large screen while the Superbook’s big battery charges your phone.

There’s also an Andromium OS app which makes Google’s Android operating system look a little more like Windows. Fire it up and you get a taskbar and multi-window features that allow you to view more than one app at a time (even if you’re not running Android 7.0). 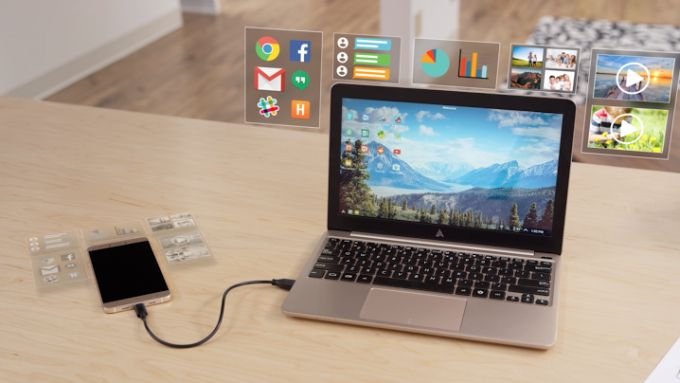 Andromium launched a Kickstarter campaign in July, hoping to raise $50,000 to turn a prototype into a real product that would ship in early 2017. The idea was pretty popular: the campaign raised almost $3 million from 16,000 backers.

The Superbook is designed to work with Android phones, but it can also be used with other devices such as a Raspberry Pi or Intel Compute Stick. Or you can connect it to a laptop for use as a portable secondary display, and Jiang says a lot of early adopters are tinkerers who want to see what they can do with a device that’s basically a laptop shell stripped of its processor and other internal components.

Eventually Jiang says Andromium hopes to ship Superbooks in emerging markets where many people’s first, and possibly only, experience with computers comes in the form of Android smartphones. The Superbook would give those people a chance to use the same apps they’re familiar with in a new way… and for a lower price than you’d typically spend to buy a Windows laptop.

While the Kickstarter campaign is over, you can still pre-order a Superbook for $109 and up.