Like to open 25 browser tabs at a time? Vivaldi has tools that makes it easier to manage your tabs and move from one to the next. Want to save notes and screenshots while you surf the web? There’s a tool for that. Like to use mouse gestures or keyboard shortcuts? There are a ton of those.

Vivaldi 1.0 is now available for Windows, Mac, and Linux computers, and the developers eventually plan to release mobile versions. But the initial target audience is people looking for a browser that’s versatile, customizable, and which has features you won’t find in other desktop web browsers.

Vivaldi Technologies is a startup founded by Jon von Tetzchner. Before starting the company, he was co-founder and CEO of Opera Software, a company that’s been building web browsers since 1994. 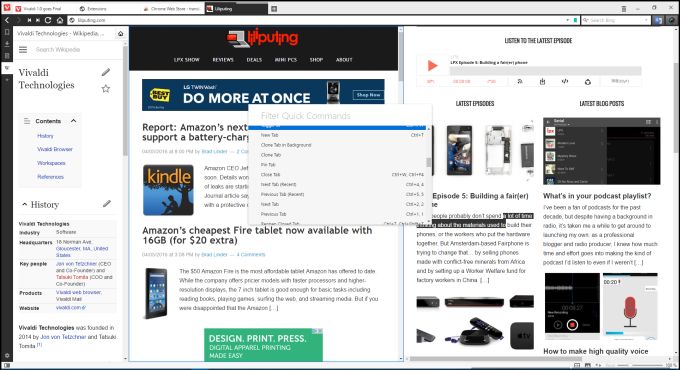 Tetzchner says he started his new company because he was unhappy about some of the changes Opera made after he left. When he realized some of the features that had been removed weren’t coming back, he decided to create a browser that he would still want to use… and says Vivaldi is basically a browser designed for his friends.

The company has been making preview and beta versions available since early 2015 and Tetzchner says Vivaldi has already been downloaded millions of times and has hundreds of thousands of active users.

Those numbers may seem tiny compared to the number of people using Chrome, Firefox, Safari, Internet Explorer, and Edge… but Tetzchner says he just needs a few million active users to break even.

For now, he’s paying for development of Vivaldi out of his own pocket rather than taking outside funding. He says he made enough money by selling his shares in Opera upon leaving the company to fund development for years to come.