The DragonBox Pyra has a 5 inch screen and a dual-core ARM-based processor. But it’s not a smartphone. In fact, this handheld computer looks more like a cross between a tiny laptop and a Nintendo DS game system.

It has a physical keyboard, a bunch of storage and input/output options, dedicated buttons for playing games, and Debian Linux software which allows you to play games or run desktop software including LibreOffice and Firefox.

The DragonBox Pyra is developed by a team led by Michael Mrozek, who wanted to create a system that not only runs open source software, but which also features open designs: anybody can open up the case and replace the parts or download the schematics to design their own case for the hardware… or design their own CPU board and insert it into the case.

Mrozek began taking pre-orders for the DragonBox Pyra on May 1st, 2016 and I reached out to him to discuss the project in more detail. 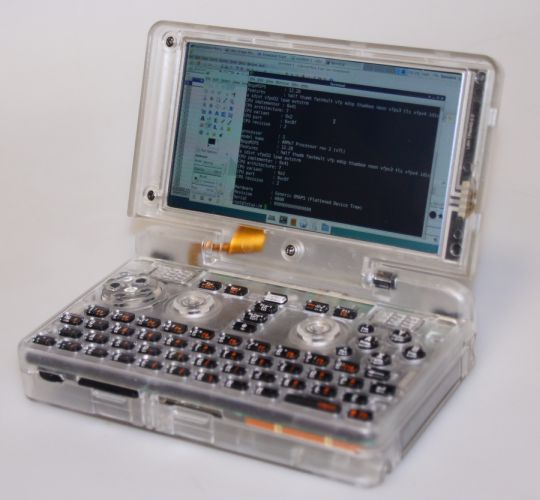 The Pyra is the spiritual successor to another project Mrozek had been involved with. The Pandora game console/computer had a similar design, but much less powerful hardware (because it was first designed nearly 10 years ago).

That project was plagued with financial problems and shipping delays, but Mrozek eventually took over the production and distribution of Pandora devices and says he doesn’t anticipate the same sort of problems with the Pyra.

Under the hood, the Pyra is powered by a TI OMAP 5 dual-core ARM Cortex-A15 processor and supports 2GB or 4GB of RAM. It has a 5 inch, 1280 x 720 pixel touchscreen display and 32GB of eMMC flash storage.

There are also two full-sized SDXC card slots for removable storage, as well as an internal microSDXC card.

There’s a 6,000 mAh removable battery, two full-sized USB 2.0 ports, a micro USB 3.0 port and another micro USB port for charging or debugging the device. And the system supports dual-band 802.11b/g/n WiFi and Bluetooth 4.0.

Mrozek says the Pyra has a modular design, which should make it easy to upgrade or repair. There are CPU and display boards that are separate from the main system board.

So while the Pyra’s 500 Euro ($575) price tag might seem kind of high, it should be possible to buy a new CPU board or other hardware in the future for a fraction of the full price.

Want to know more about the price, hardware selection, and philosophy behind the DragonBox Pyra? Then listen to LPX episode 8 for the full conversation with Michael Mrozek.

Here are some links to projects mentioned in this episode:

And if you want to help support the LPX podcast, please consider making a donation to our Patreon campaign.