Radio and podcast hosts and reporters often need to interview people who may be far away, but when you hear the interview on the air it sounds like they’re in the same room.

The best way to do this is to get the guest into a recording studio which can use professional equipment to record half of the conversation, and then send the audio to the interviewer so it can be mixed together seamlessly. The second best way it to perform a “tape sync” or “double ender,” which involves sending a local reporter or engineer out to record the guest while an interview is conducted over the phone.

But both of those setups can be expensive and time consuming… and these days there are simpler solution for getting audio that’s better than a phone call recording (although not as good as a professionally recorded call): use a computer or use your smartphone.

In this article I’m going to explain how to make a high-quality audio recording using a voice recorder app on your phone. To find out how to record an interview over the internet using a computer, check out our article on using Zencastr to record interviews for podcasts or radio stories. 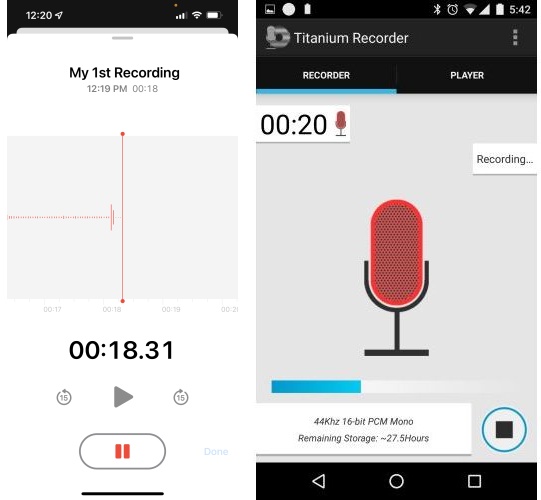 Recording with a voice memo app involves asking the person you’re interviewing to do a little bit of work. But if everything goes as planned, the end result is an interview conducted over the phone, but which sounds a little more like the host and guest are in the same room.

The difference in sound quality can be pretty dramatic. Here are two clips recorded at exactly the same time: one recorded on the smartphone itself, and the other recorded remotely over the phone line:

Here’s how to do it with an iPhone or Android phone. Note that there are multiple voice recorder apps that will work, but for the sake of simplicity I’ve selected a single free option for each type of smartphone.

I’m going to start with the iPhone, because it turns out that recording high-quality audio is super-easy on most iPhone models. That’s because they have a built-in voice memo app which is pretty good, and typically have pretty good microphone.

Step 1: When the host/interviewer asks you to start recording, open the Voice Memos app on your iPhone. If you’re conducting the interview on your iPhone you can hold it in your hands. But if you’re conducting the interview over a land or a different phone, you can just place the iPhone on a table in front of you, preferably within a foot or two of your mouth (you could try placing the phone on top of a stack of books — or just holding it to your face as if you were talking on the phone).

Now your iPhone will record your voice while you talk on the other phone.

Step 2: Hit the big record button at the bottom of the screen to start the recording.

You should now see an audio waveform near the bottom of the screen and numbers counting the time of the recording. The button you pressed to start the recording will now have a red “stop” icon.

Step 2a (optional): You can drag that recording indicator up to get a full-screen view that looks like the image below, where the big button changes from Stop to Pause:

Step 3: When you’re done recording, hit the button at the bottom of the screen. If you see a Stop button, that will end the recording. But if you’re in full-screen view and see a Pause button, then press that and then tap the “Done” button next to it.

Step 4:This will bring up a menu that lets you name the recording. Or you can just hit “Save” to leave the name as “New Recording.”

Step 7: … and hit the share icon to bring up a list of options. You can choose Mail to send the voice recording to the interviewer via an email message. If the file is too large to send as an email attachment, your iPhone will ask if you want to use Mail Drop, which allows you to upload the file to iCloud and send a link via email that the recipient can use to download the file.

Alternately, you can share the file to Dropbox, Google Drive, or any other cloud storage service you may use.

If you have iTunes on your Mac or PC, you can also use iTunes to backup your memos to your computer for easy access.

Some Android phones come with voice recorder apps pre-installed, while others do not. And not all of those apps are created equal.

So while there are a number of good options, I’m going to recommend you download and install a free app called Titanium Recorder. It makes it easy to record and share high-quality audio files.

Step 2: Open Titanium Recorder on your phone tap the three dots in the upper right corner and choose the Settings option. 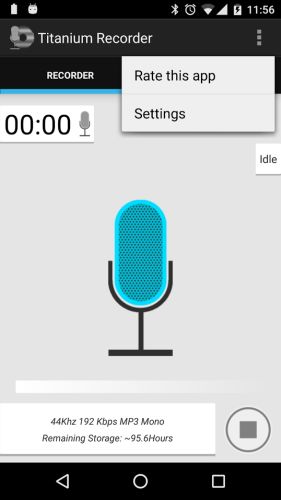 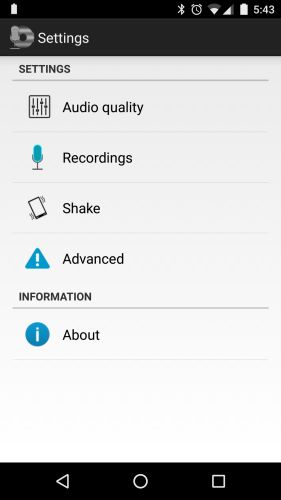 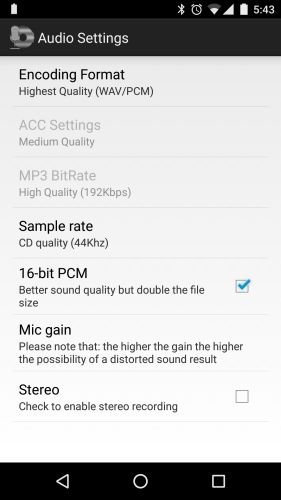 Step 5: Choose your Encoding format. WAV/PCM will provide the highest quality audio, but it will also create the largest files. If you’re worried about the recording taking up too much space (about 600MB per hour), choose MP3 or AAC. But do not choose 3GP. 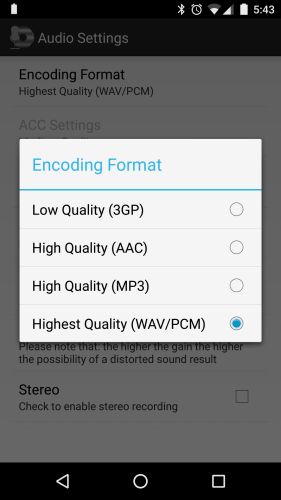 On the settings screen, you should also probably make sure the box marked Stereo is unchecked. Since you’re probably recording through a mono microphone, there’s no reason to record in stereo… which would just make the files twice as big as they need to be.

Step 6: When you’re done with the settings, hit the back button until you’re back at the screen with the big blue microphone.

Step 7: When the interviewer asks you to begin recording, tap the microphone icon. It will turn red and you’ll see the volume meter and recording length graphics start to move. 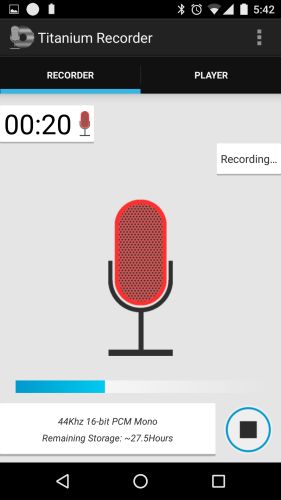 If you’re talking to the interviewer on the same phone that you’re using to record, just hold the phone as you normally would. If you’re using a different phone, place the recorder on a table in front of you, preferably within a foot or two of your mouth. (You could try placing it on top of a stack of books so it’s level with your mouth, or holding it to your head as if you were actually talking on this phone… yes, I know holding two phones might feel akward… but you’ll sound great!)

Step 8: When it’s time to stop the recording, hit the square button on the bottom right side of the screen.

Step 9: You can find a list of recordings by tapping the “Player” tab above the microphone. From the Player screen, you can listen to your recordings or share them. 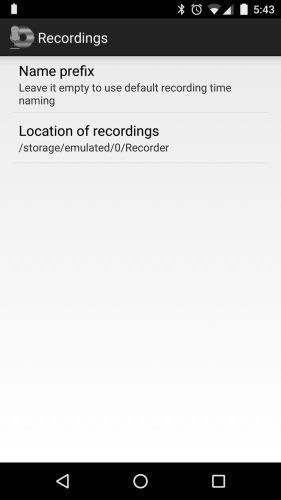 Step 10: There are two options for sending the audio to the interviewer. You can long-press the item you want to share, choose the share icon, and then email the file, upload it to Dropbox, Google Drive, or another service, or follow any other instructions that have been provided. 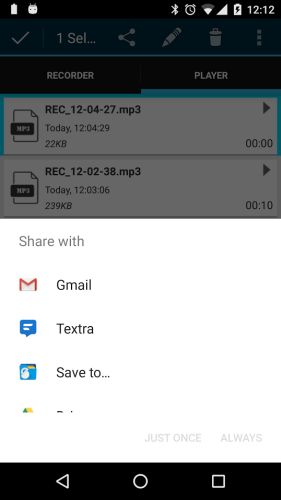 But you can also plug your phone into your computer with a USB cable, tell your PC to treat your phone as a storage device, and navigate to the Recorder folder on your device to find your files.

For example, to access recording from my phone on my Windows PC, I navigate to the directory called:

From here, I can copy the files to my hard drive, email them, upload them to an FTP server, or make other changes.

There are multiple ways to do this, but hopefully the step-by-step instructions provided above will make this easy for anyone with an Android or iOS device to. There may be other apps that let you do this on a Windows phone, BlackBerry device, or smartphone with other operating systems. But I wanted to focus on the most popular platforms here.

Note that while iPhone and iPod touch devices have a built-in Voice Memo app, if you’re using an iPad you may need to download a third-party utility.